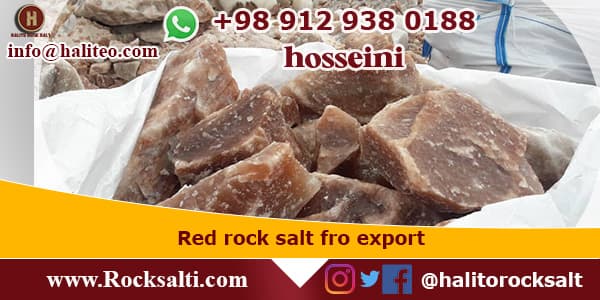 Red rock salt for export sale center, with a very exceptional purity of 98.5%, the rarest type of red rock salt similar to the Pakistani and Himalayan specimens, the possibility of exporting rock salt in bulk and a jumbo bag and a 50 kg bag.

Red salt rock is one of the most beautiful and unique types of rock salt in Iran and the world, which has turned red due to the presence of iron in it.

Depending on the presence of each element inside the rock salt, a special color is created in it and Iran is one of the countries where red salt rock is naturally present.

The salt rock extracted from the mines in Iran uses its various uses and characteristics, and in this field, in addition to Iran, red salt rock is also found in Pakistan.

These two countries are the main sources of red salt production in the world, and this type of rock is not found in other countries, or it may be rare in some areas and in small quantities.

Iran is a vast country with huge salt rock mines, which due to the variety of products and the possibility of extracting it at a very reasonable price, has caused many extracted materials to be used for decorative consumption.

Red salt rock is a type of rock salt that, due to the abundance of iron in it, its color tends to be red and is mostly used for decorative purposes, making salt bricks and using it as a cooking plate salt rock.

The red salt rock available in the Halito group is available in a variety of colors, in a pale and colorful color, or has streaks of other colors in combination or evenly.

This diversity attracts both those who need this type of stone for decorative purposes and those who want industrial efficiency from red rock salt.

[av_notification title=’Note’ color=’green’ border=” custom_bg=’#444444′ custom_font=’#ffffff’ size=’large’ icon_select=’yes’ icon=’ue812′ font=’entypo-fontello’ admin_preview_bg=”]
Red rock salt has been found in two parts of the world more than other countries, including Iran and Pakistan. Of course, Pakistan’s red and orange salt rock resources are somewhat higher than Iran’s, but much more expensive than the Iranian sample.
[/av_notification]

Pakistan and its traders have introduced Pakistani red saltstone, or Himalayan salt, to the world for years by promoting it in international markets, while it is not much different from Iranian red rock salt in terms of minerals.

But in the last two years, many countries have realized this and are preparing their red rock salt from Iran. 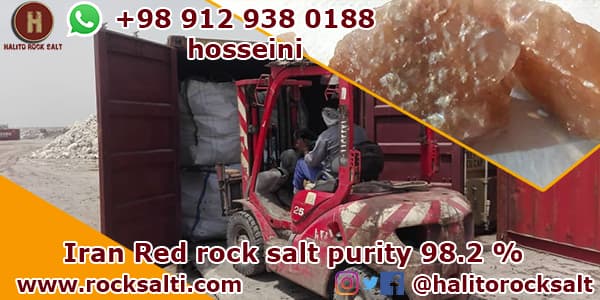 As mentioned, red salt rock is much more iron than other salt rocks, so it has changed the color of this salt rock to red.

If you cut the red rock salt into a slice or a plate and use it to cook food, the necessary iron will enter the food and your body will not be deficient in iron.

Of course, always remember to wash the plate rock salt for the first time before use so that the dust from the cut is completely removed. 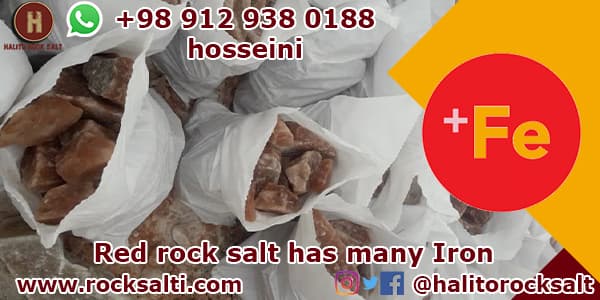 One of the products of Halito collection is the supply of all kinds of salt stones for cooking, which gives a wonderful taste to food, especially grilled food.

Contact us to prepare a table salt rock for cooking. It is also possible to buy this product individually and in bulk.

Another of the rarest types of rock salt, which is as rare as red salt in the world, is blue rock salt.

This type of rock salt is very beautiful and a dazzling blue color is formed inside it and its main fans are in Europe.

Like red salt rock, which contains a lot of iron, blue salt rock has high levels of potassium, which changes its color to blue.

Due to the high potassium content of this type of rock salt, the therapeutic use of blue rock salt in Europe is very high and in some countries it is available to the public as a medicinal product for treating depression, although due to its high price, everyone may be able to Don’t buy it. 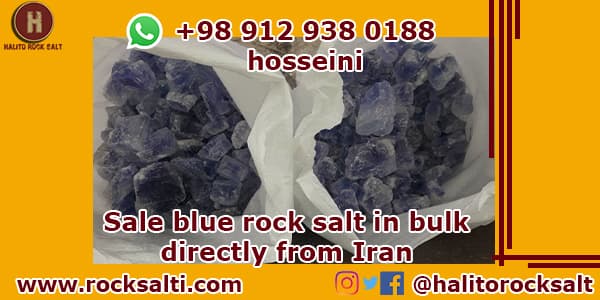 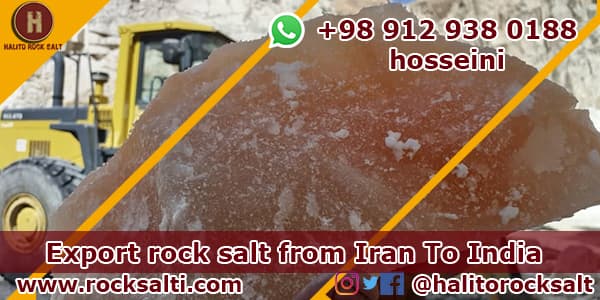 The Halito rock salt group has so far exported its rock salt to many countries, including Georgia, Iraq, Afghanistan, India, the UAE, Qatar, Oman, and Bahrain, and major salt buyers in these countries are among the main buyers of our collection.
In addition to red rock salt, Halito rock salt collection offers the rarest types of rock salt for export.